I am honored to receive a 2022-2023 WSU Center for Arts and Humanities Faculty Fellowship.

In April, I was honored to receive the 2022 WSU President’s Awards for Leadership.

I am excited to announce that I have published my essay “The Politics of Survey Cinema History Textbooks” in the peer-reviewed journal “The Projector: A Journal of Film, Media, and Culture.”

The genesis of this essay harkens back to when I was a community college instructor. There I taught “Introduction to Cinema History” nearly every quarter. Teaching that class over and over again caused me to think a lot about what is present in the cinema studies and what is absent or obscured. I kept asking myself: “Why? Why this material in this way?” I realized over time that there was no divine declaration of what is important in film history. The canon is a man-made construction. I started to interrogate the way cinema history is framed in several survey textbooks to interrogate their politics.

Cinema history textbooks have long served as an introduction to the discipline and, for as long as they have been used, they have been criticized. Writing in 1950, James Card states, “The student turns to the film histories and there finds confusion, gossip, and the wildest sort of speculation.” This article uncovers the politics of contemporary survey cinema textbooks, including Flashback: A Brief History of Film (2009) by Louis Giannetti and Scott Eyman, A Short History of the Movies (2010) by Gerald Mast and Bruce Kawin, Movie History: A Survey (2011) by Douglas Gomery and Clara Pafort-Overduin, and Film History: An Introduction (2018) by Kristin Thompson and David Bordwell. Building on work in education and cultural studies, the article analyzes problematic canonized patterns, which include a tendency to obscure the contributions of women and people of color, a preference for framing film as an art form, and a general simplification of film history that discourages students from thinking critically about what is missing or marginalized in the historical narrative.

In February 2021 I was honored to be selected as the Oustanding Faculty member from the College of Arts and Sciences during an online ceremony sponsored by the Washington State University Provost, Dr. Elizabeth Chilton. During the ceremony College of Art and Sciences Dean Todd …

Congratulations to my student Kateah Nims! Today she became the first Arts and Academics Academy student to win an award at the Northwest High School Film Festival!

The students in my Video Production I class at the Arts and Academics Academy shot their first Lip Dub at the end of last semester to the old school tune “September” by Earth, Wind, and Fire. The day we filmed was probably my favorite day of teaching ever! So many students stepped out of their comfort zone and into the lime light to make the day especially memorable… and the video is not too shabby either.

Big shout of here to seniors Kia Hang and Castelly Castellon who did a great job co-directing – including convincing the whole school that they should learn to dance “The Hustle” for the finale! Also, my hat is off to cinematographer Kaitlin Hubbard who can now balance a Glidecam faster than anyone I know and did a great job shooting for her first big video project.

You can check out the final product on AAA’s YouTube channel.

Recently the students in my photography classes at the Arts and Academics Academy in White Center, Washington launched a project called Everyday White Center on Instagram.

South Whidbey has produced a fair amount of filmmakers including yours truly. Maybe it is something in the water?

During Spring 2013 I had the pleasure of teaching Reality Bytes: Introduction to Digital Humanities at the University of Washington Bothell. The students created some amazing work in that class including a remix of one assignment they’d completed during their first year at UWB using the Scratch program. They also had to create a Manifesto about what the Digital Humanities should be and do and accompanying Montage using the graphics manipulation software GIMP.

You can check out the work that my students did on our class website here: http://faculty.washington.edu/ruthmg/wordpress/. 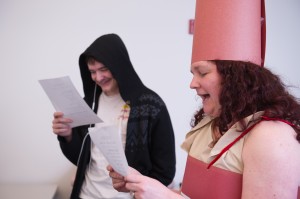